The sun is shining, the breeze is cool, and the skies are clear. It’s the perfect weather for a bike ride. Whether you’re taking a solo trip, biking with the kids, or going on a group ride, these 8 Rhode Island bike paths in no particular order are perfect.

After your bike ride, treat yourself to a Rhode Island Red Food Tour! There are plenty of racks to secure your bike in both Providence and Newport. You know you’ll be hungry after all that riding. Book your Downcity Providence or Newport Neighborhood Food Tour today!

Ocean Drive in Newport is famous for its stunning views and the mansions it encompasses. You can bike as much or as little of the 10-mile drive as you’d like. There are plenty of places to stop along the way including Fort Adams State Park, Hammersmith Farm (President Kennedy had his wedding reception there in 1953!), and Gooseberry Beach. You’ll definitely be tempted to stop and take photos of the gorgeous ocean views and the historic mansions. The loop isn’t far from downtown Newport, so once you’ve concluded your ride, you can stop in at Mission for some well-deserved hot dogs, burgers, and fries. If it’s brunch you’re craving, you just have to stop in at Newport’s best-kept secret, Belle’s Cafe.

For more information on the Ocean Drive Loop and other biking routes in Newport, click here.

Bike Newportis a great resource for all things biking in Newport.  They offer Park n Bike and a list of Bike-Friendly Businesses. Visit their website here.

The Blackstone River Bike Path stretches 11.6 miles from Woonsocket to Cumberland. The bike path follows the Blackstone River as much as possible, providing a scenic route. There are views of the river, waterfalls, marshes, and wildlife. The route is lined with many old mills, reminding visitors of the big part Blackstone played during the Industrial Revolution. The path is on and off road. The path ends in Cumberland, but it is easy to pickup your ride in Providence through the East Bay Bike Path that starts at India Point Park. Experienced bikers can easily find the start of the East Bay Bike Path and to Providence using on-road markers.

The East Bay Bike Path stretches 14.5 miles from Providence to Bristol. It was the first multi-town bike path built in Rhode Island. This path is hugely popular with Rhode Islanders. The path is mostly flat with one hill alongside the Veterans Memorial Parkway in East Providence.

There are spectacular views of the Providence skyline and industrial shipyards. The route goes through local parks and runs alongside marshes, rivers, and ponds in Barrington, Warren and Bristol. Be sure to jump off in Warren for a few of Rhode Island’s famous iconic foods and drinks like Del’s Lemonade, Deleckta’s for a classic RI Coffee Cabinet, Rod’s Grill for a Hot Weiner or take a short walk down to Warren’s Historic Waterfront and sit by the river for Blount’s Clam Shack treat! Bristol’s Beehive Cafe is a great place to fuel up or down depending on your starting or finishing location.

Follow Rhode Island Red Food Tours on social media to keep up with all of the fun happenings in Rhode Island this month (and every month!)

The Washington Secondary Bike Path is the longest bike path in Rhode Island, coming in at 19 miles. It stretches from Cranston Street in Cranston to Log Bridge Road in Coventry. It’s named after the abandoned railroad that once connected Providence and Hartford, Connecticut.

This path has been built in segments since the 1990s. It’s often referred to by the segment names of the paths: Trestle Trail, Coventry Greenway, West Warwick Greenway, Warwick Bike Path, and Cranston Bike Path. Construction is underway to restore old rail bridges to complete the path toward the Connecticut border. Once construction is finished, the Washington Secondary Bike Path will be 24 miles long!

The path itself contrasts industry with nature. It runs under railroad trestles and along busy retail strips and ducks back into rural stretches.

The Quonset Bike Path is great for a family adventure. It’s entirely off-road and only 2.5 miles. It runs through the Quonset Business Park to Calf Pasture Point. The path runs through a quiet residential area before heading into a wooded area. Off of the path, there are three public beaches, a golf course, and the ferry to Martha’s Vineyard. Fun fact – Quonset is home to the northeast’s largest air shows!

If you’re not ready for the ride to end, you can follow the paved roads into Calf Pasture Point. The path at Calf Pasture point ends in nearly a mile of undeveloped beach.

For more information about the Quonset/Davisville Bike Path, click here.

The Warren Bike Path is another family-friendly path. The 1-mile, tree-lined path stretches from the Kickemuit River to Long Lane, close to the Massachusetts border. Warren has started planning for an extension of the bike path to meet the East Bay Bike Path. It’s an easy ride since the path is mostly flat and off-road. The trail ends in The Meadows, a beautiful park perfect for a picnic.

For more information about the Warren Bike Path, click here.

The Ten Mile River Greenway connects Slater Park in Pawtucket to Kimberly Ann Rock Athletic Fields in East Providence. Unlike its name suggests, it’s only 2 miles. The path follows the natural contour of the land and provides scenic views of the James Turner Reservoir. When you start (or end) in Slater Park, be sure to enjoy the historic 1894 Looff Carousel!

The South County Bike Path stretches 7.8 miles from Kingstown Station to Mumford Road in Narragansett. It connects the Kingstown Station to Narragansett shoreline. The path is mostly on the former Narragansett Pier Railroad, which dates back to 1876. The path is mostly flat with some gradual slopes. The path runs through historic railroads, the Great Swamp Management Area, residential areas, ponds, parks, a cemetery, Wakefield downtown, and ends right at the ocean. It’s a truly gorgeous route. Riders experience the many facets of Rhode Island all in one ride.

The Wilson Park Bikeway is a 1.5-mile loop circling Wilson Park in Colonial Wickford. Stop for a picnic, enjoy hidden coves and water views, shop at nearby antique stores and boutiques. This bikeway is a picturesque route in South County.

For more information about the Wilson Park Bikeway, click here.

The Coventry Greenway and Trestle Trail is a five-mile converted railway. The route is completely paved and is a popular pick amongst hikers and bicyclists. Fun fact: three miles of the trail have been designated the first Rhode Island segment of the East Coast Greenway, which will span from Maine to Florida!

For more information about the Coventry Greenway and Trestle Trail, click here.

Providence is a great, bike-friendly city. It’s also an up-and-coming foodie hotspot. Taste your way around the city with our new Downcity Providence Food Tour. You’ll be hungry after all that biking around the city! 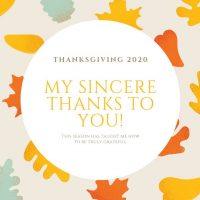 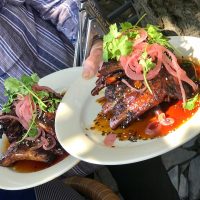 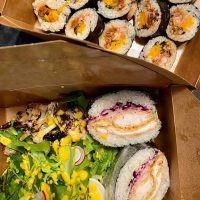 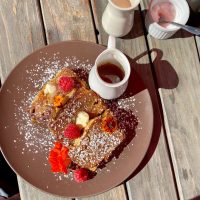